It's been quite some time since my last post but I'm really not in a mood for blogging. But in the last weeks so many awesome things happened that I really feel the need to share everything with you!

After I've been to Germany and met all of the supercute Gyaru there I really felt like I need to join a Circle, but as I live in Austria and we didn't have one there was no chance. So I got my lazy ass up and founded the first Austrian Gyaru Unit! Our name is Melody Pop or Mero Pop and we consist of 24 Gals from Austria. Some of us are just beginners but as Gyaru is about friendship and fun (and of course fashion) we don't care if everybody's a pro. We wan't to help each other develop our styles and get better together. We had our first meet last month and it was so awesome!
We had drinks, took some pictures and talked about where we want to go with the Unit. If you are a Gyaru from Austria (even if you're currently not living in Austria) you are welcome to join us! Just message us on Facebook or leave a comment below!

Next great news is: *drumroll* we got a valentine this week! First off I was totally shocked about how many valentines there were! This is simply amazing :D After 6 posts full of lovely pictures I gave up reading but then in the middle of the night Chichii (the sweet gal on the right) texted me that we got a valentine! I'm so thankful! We were only yesterday talking about how we would react if we got a secret and then only hours after that we got that cute valentine. From left to right: Petra, Me, Chichii

Last update is about one of my hobbies I haven't really posted about before: Cosplay. Yes I do love cosplay. I'm not really into cosplaying manga characters (though I'm really thinking about doing one of the girls from attack on titan), but I do really love cosplaying fantasy, game and comic characters. I already finished my swimsuit! Lady Loki cosplay and wore it at Made in Japan. Right now me and my sister are currently working on a matching Lady Thor outfit, as well as Iltani and Amunet from Assassins Creed 2 and last but not least I'm working on the dress Daenerys wears in Quarth. All of these should be finished by the 9th of August when Aninite starts. I haven't done anything since 2009 and I was really overwhelmed by how everyone reacted to my outfit at Made in Japan. I did the design all by myself, of course it's inspired by her original Outfit. The head part is as close to the original as possible and with the rest I just went for what I thought might be a bikini that a goddess might want to wear. So here are finally some pictures <3 as="" be="" get="" i="" ll="" more="" p="" posting="" rest="" soon="" the="">

Oh and by the way that's my sister on the right ;D

That's it so far! We'll be having another J-Fashion Lovers Austria Meet up on 21st of July so there will be some more posts coming up! Until then have a great summer!

I'm not sure if I told you before but I went to Düsseldorf last weekend to attend the annual Japantag. I was really excited as it was the first trip I've organized in years but everything went well and we arrived safely on friday. Our hotel was right in the main trainstation and not quite what we had expected but it was fine and we haven't been spending too much time there anyways :D

After we got our luggage to our rooms we went on a little exploring trip and found the utmost shocking thing I've ever seen. It was a vending machine for syringes. I haven't been aware that drugs are such a big topic in germany.
We've been walking around looking for a nice restaurant for about one or two hours and finally decided on a korean one (which was to be honest maybe the best decision we could have made). I had Dolsot Bibimbap and it was absolutely delicious <3 nbsp="" p=""> 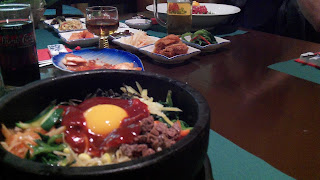 Afterwards we just had some drinks at the hotelbar and chatted a bit.
Oh I didn't mention who joined me on the trip! It was Shu (a very good friend of mine) and his co-worker Dragan (got to know him only on friday). We had so much fun all through the weekend! 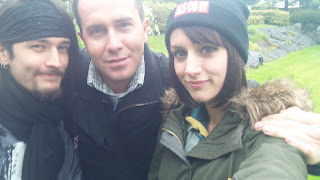 On saturday we (well to be honest they) got up rather late and had a second breakfast at Dunkin Donuts and Starbucks. I'm so in love with those donuts, even though I might have gained a pound or two thanks to them :D We went straight to the festival area and had a look around first to see where everything is and then we just enjoyed our day. We met loads of great people, had frozen beer, watched some BBoys at the rhein shore and in the evening we met up with the german gyarus! 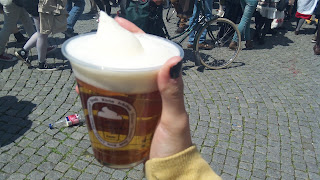 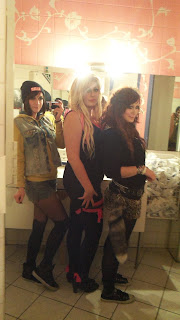 Shortly before the big firework started at eleven pm we had to part and I was kinda sad at first but I know that I will meet them again at least next year in Düsseldorf! We missed most of the firework but the finale was just amazing. I don't think I've ever seen anything that beautiful *w*

On sunday we checked out of the hotel around lunchtime and went to the other side of the rhein where we visited the EKO-house and the shin-buddhist temple. It was overwhelming. It felt so new and yet so much like home <3 again.="" definitely="" go="" i="" ll="" nbsp="" p="" there=""> 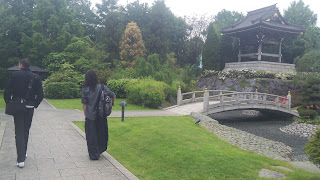 Afterwards we had a little walk in the nordpark and visited the japanese garden there and finally mad e our way back to the historical citycenter where we found the utmost awesome burger restaurant I've ever been to! It's called Space Burger and everything in there is just freaky. Starting at the interieur and ending at the burgers. I had an "el morte del torro" which basically consists of a fresh toasted bun, a superfresh burger, avocado, guacamole, salsa, cheese, jalapenos and those mexican chips nobody actually knows what they're called like. It was sensational! The soft and the crunchy, the sweet and sour, the mild and hot combined! I loved it! 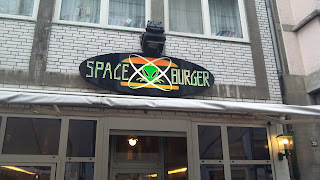 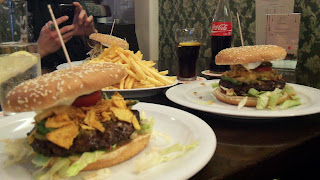 Our flight home was quite quiet as we were really tired after two days of constantly running around Düsseldorf. My best friend Chris picked us up at the airport and the two of us had a drink at a mc cafe. All over it was one of the best weekends I had so far and I really can't wait for next year <3 nbsp="" p="">
Thanks to everyone who made this happen! I love you all <3 p="">
Love, M.
Eingestellt von Unknown um 03:48 Kommentare:

Hi sweeties
I know I've been inactive for more than two months already but I had so much going on and no time and inspiration for blogging. I've been working out regularly and I'm really getting in shape. I've been trying to rescue my hair and work on my make up skills as well as on some of my cosplays.

So before I'll show you some recent pics there's some things I want to announce!
First and most important thing is the upcoming J-Fashion Lovers Austria Meet in Vienna! It's already the third Meet since the Group was founded last year and the community is ever growing. There are Lolitas, Gals, Pastelgoths as well as Gyaruos, some that dress Shironuri, Mori Kei, Dolly Kei, Cult Party Kei or just simple Streetstyle. Everyone is welcome to join in on the 27th of April! We will meet at 13 o'clock in front of the MQ in Vienna. Dressing in J-Fashion is not a must anyone who's interested is welcome!!

Next up is something I've been thinking about for almost one year: The founding of an austrian Gyaru-sa!
As Gyaru is getting more and more popular in my country I thought it's time to finally form a circle. I've been talking to a few girls so far and I guess at the upcoming meet we will have the cance to kind of form a base for our circle. I'm really excited about this and I hope everything will turn out good and we will be able to spread the word about gyaru!

So now on to the most recent pics! Around easter we had a J-Fashion Lovers Austria Meet up in Linz and about two weeks later I attended a Game of Thrones Movie Night in Linz where my sister and me dressed as Alayne Stone and a modern Daenerys (just couldn't find a matching fabric for my dress so far). 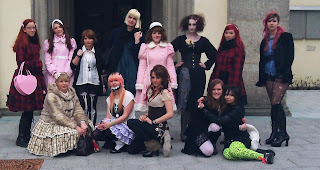 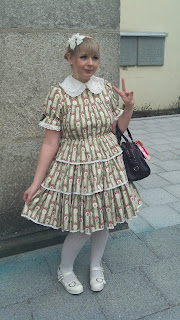 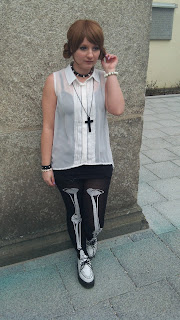 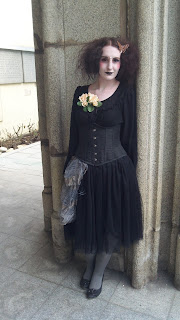 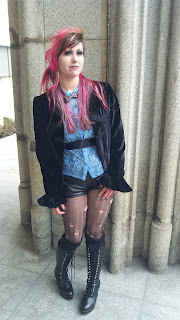 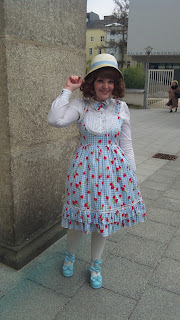 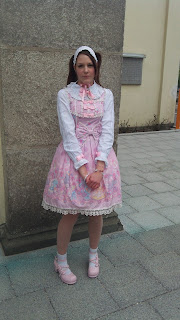 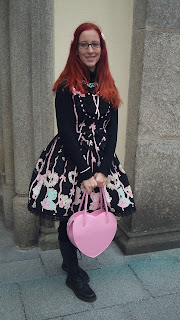 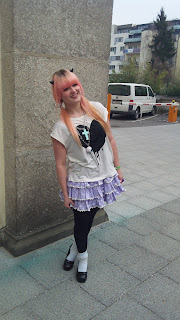 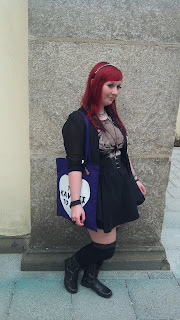 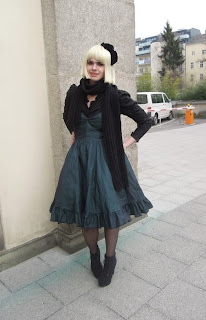 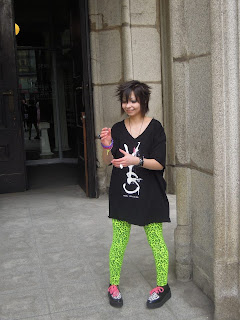 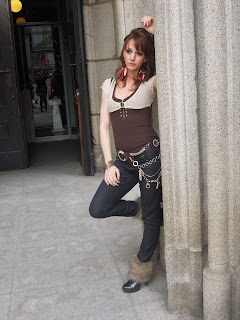 copyright for the last pic goes to Markus Prinz